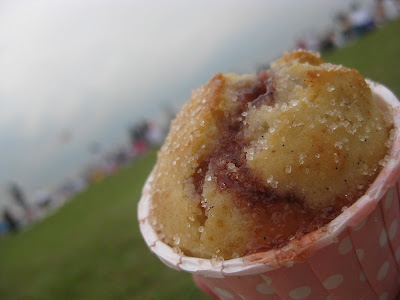 Hanged out with the gang today. Had a mini gathering at Marina Barrage. We've just discovered a new found past time - kite flying! This is the second time we've been to the barrage within 3 weeks. We only had one $3.50 kite (which we shamelessly named it 'Soaring Guppy') the first time we went and it flew so far that it became a dirty pixel in the sky. This time we had not 1, not 2, but 3 kites!! LOL
Grabbed this recipe online only the night before. I halved the recipe as 3 1/2 cups of flour seem like a pretty intimidating volume to me. Love the outcome of it. The nutmeg perks up the vanilla and heightens the taste of the muffins, but I don't want to add too much of it as the spiciness may take over the whole flavor department. I like how the cinnamon sugar on the muffins top gives the already-crispy muffin crust even more crunch. A refreshing change from the usual chocolate chip/blueberry muffins. I ended up with lots of cinnamon sugar dip after sprinkling on the muffin tops so you may wish to reduce the cinnamon sugar dip ingredients as long as the ratio is there.

And, kite flying and playing 老鹰捉小鸡 are fun and nostalgic. :D 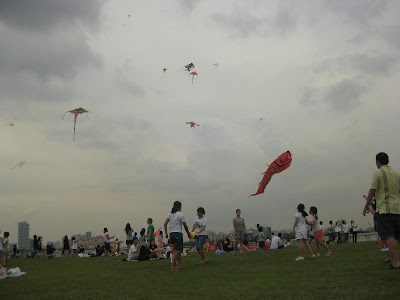 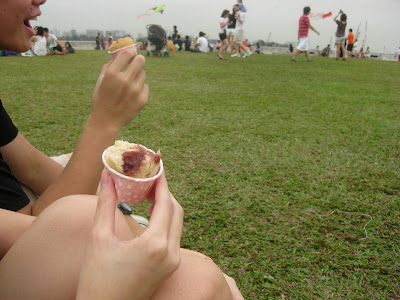 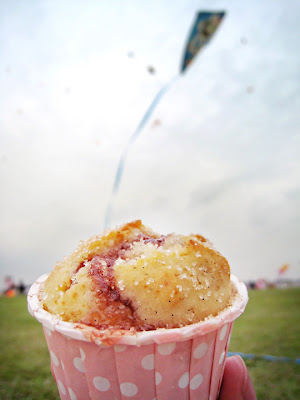 1. Preheat oven to 175°C
2. Heat milk with scraped vanilla seeds and pod in a saucepan over medium-low heat for abt 15 mins to infuse the flavors together
3. Remove from heat and let it cool to room temperature
4. In a separate bowl, combine flour, baking powder, cinnamon powder, nutmeg, and salt and mix well
5. Whisk in sugar, vegetable oil and egg into cooled milk
6. Blend milk mixture into flour mixture until just combined
7. Fill muffin cases 2/3 full of batter, and spoon 1 tbsp of jam (I use 1 tsp) into the centre of each muffin and top with the remaining batter
8. Bake for 35 ~ 45 mins until light golden brown on top (I baked for 30 mins for my smaller muffins)
9. Let muffins cool on a rack while you prepare the dip mixture
10. In a separate bowl, mix cinnamon powder and sugar
11. Brush muffins with melted butter and dip them into the cinnamon sugar mixture (I sprinkled the sugar on top instead)
Posted by Jean at 10:19 AM

Email ThisBlogThis!Share to TwitterShare to FacebookShare to Pinterest
Labels: Muffins

Thanks to Lena, Cosy Bake & Alice!